I made this video to promote our event!

Not a real haunted house — the fun Hallowe’en event. Just so we’re clear! 😜

There are a couple of new elements to this year’s experience, and I’m finding that they are having a positive impact on my mood:

1) I’ve got reams of help, in the form of three — THREE! — other adults sharing the tasks of design, tracking, and development, and over sixty (OH MY GOD) students who have signed up to participate. I’m fully aware that we may only end up with 30 or 40 regular volunteers, but that’s away and beyond what we had last year.

2) I get to be crafty, and not just in planning messed up ways to make people scream (and possibly pee a little) — I get to make messed-up crafts. This afternoon, for example, I experimented with zombifying a stuffy. Observe the prototype below! 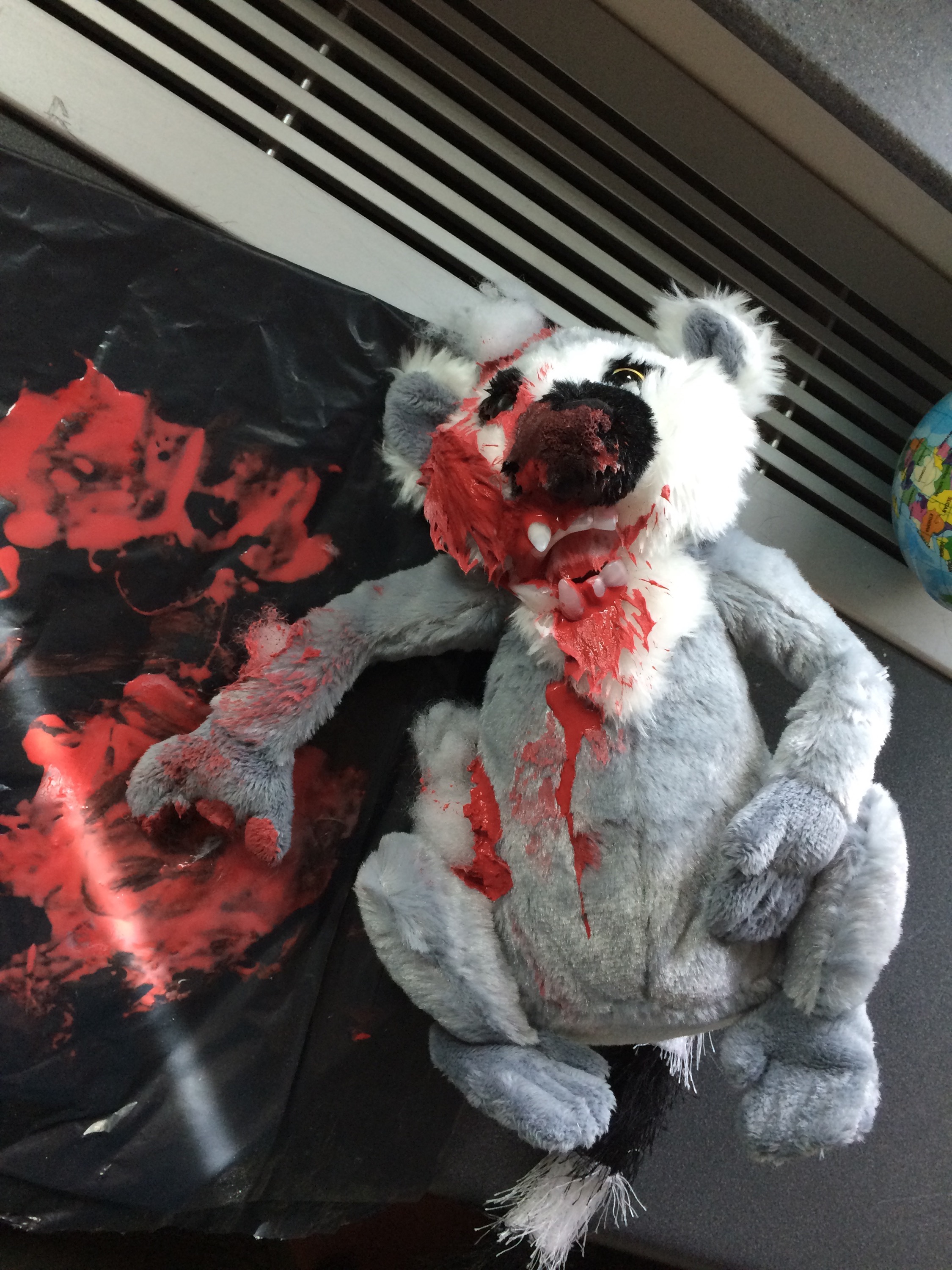 I wonder what the custodian thought about this?

I think I will experiment further with adding green and yellow blobs for protruding guts and bones, maybe using papier mache. It was so fun making it, though! As I told one of my partners in crime, I felt both bad and giddy at the same time. Found myself actually apologizing to the thing while I was cutting it open and pulling its stuffing out.

And then laughing crazily as I daubed it with red paint and glued on the fangs.

And this is just the start. We have pages of plans and notes to share with the rest of the volunteers, teams within the larger group that will work together to make the second haunted house even more creepy and frightening than the first.

I will admit, it’s taken me a little while to get my momentum up on this. Coffee helps, but even more so is the excitement of the others, their push to do it well and get the jobs done — that’s lighting my fire, even in my exhaustion. I cannot wait to see it pulling together over the next two weeks. And as soon as I have footage, making the trailer for social media, too! (I’ve got one ready, using pictures from last year, which will go live on Oct 1 — I’ll post the link for you to enjoy as well. 😬)

I worry, too. I’m anxious about trusting the kids to get their jobs done, and to be there when they say they will be. I worry about the lists of things to be obtained by borrowing, buying (damn, still haven’t asked about my budget!), and making by hand. But knowing I’ve got a team around me and (potentially) a small army of teenagers who are eager to make their friends and family shiver and shriek makes all the difference.

Stay tuned for updates and photos as the project takes shape. Hallowe’en’s a-coming!

First middle / junior school dance* of the year, tonight. Bridget was so excited to learn about it yesterday, she was practically vibrating. She had her outfit put together last night, and repeatedly squealed how nervous she was. Jack was more laid back, nearly waiting until the last minute before deciding to go.

Bridget didn’t even look back, once I paid her ticket. She drifted forward, Cinderella at the ball, found her friends and there were happy hugs all around. When I picked her up, she didn’t want to leave, of course. Her crush wasn’t there, but she wasn’t too disappointed. She’d chased a different boy down and made him slow dance with her.

We had another chat about consent on the way home. 9 and a half, folks.

Jack didn’t have quite as good a time as he’d hoped. I won’t go into the details here, but suffice it to say that he finds himself wishing life were scripted. Doing my best to help him figure things out.

This is the part where I concentrate on remembering the roller coasters of fresh hormones at 14. And at almost 10. It’s been getting harder, though. Maybe that’s why some writers focus on youth fiction — it might become easier to reconnect with those memories and be able to empathise with the kids.

My son is twelve years old, turning thirteen this February. I’m trying not to focus on that. But there are certain realities that are becoming more and more clear as the time passes. He has played COD at a friend’s house, knows more about the Umbrella Corporation than I ever will, hacks and cheats with the best online when playing Minecraft, and squirms uncomfortably at awkward romantic moments on TV and movies. But he’s been quietly interested in the idea of dating for at least two years, had his first part time job this summer as a soccer referee, and does his own laundry.

And until recently, he still believed in Santa Claus.

I had mixed feelings about that. I always have.

It seemed a given, when he was a very small child, that we would encourage him to believe in the jolly fat man. Santa Claus has significance for me, as a Pagan, and it’s firmly embedded in the culture of North America. But I had a hard time reconciling myself to one interpretation: that we were lying to our child. It was especially hard when he was four, and he asked why Santa had brought him the Buzz Lightyear he’d already seen at the local department store. We quickly explained that Santa had a deal with the toy stores, and that this was the one time of year when they would give the toys away for free… And the following year, we made sure that Santa left him a wooden toy under the tree, instead of something clearly factory-made.

The questions continued every few years. “Is Santa really real?” Yes. “Hey Mom, guess how I think he travels the world to deliver presents in a single night?” (I was proud of his conceptualization of time, physics, and engineering for Santa’s sleigh.) But every time I reaffirmed his belief, I felt a little more guilty. When would the right time be to admit the truth? How upset would he be, to learn one of the structures of his world was a false front? Would he understand, like Virginia, that Santa is a feeling, a metaphor, a symbol that is in its own way as tangible as snow?

I tried explaining it once, but he wasn’t ready to understand metaphors, so I let it go. I think he was nine.

He’s intelligent, my son. He’s always paid attention to conversations. He catches onto clues. And we haven’t shied away from television shows in which the characters talk about the non-existence of Santa Claus. Still, I thought that at a certain point, he would just sort of figure it out, casually admit it, and we would move on. We would keep it going for his little sister, and he would be in on the fun, the mystery, without being disappointed. But I couldn’t bear the thought of this small part of innocence being lost to him, the disappointment he might feel, so I couldn’t gather the courage to broach the conversation myself.

And then, some time during the last two years, at some point in the holiday season, he suddenly asked his father if he should stop believing in Santa. His friends had begun to tease him, pointing out that they already knew it was their moms and dads. My husband is a good man, and he understood Jack’s dilemma: Do I cling to the childhood that I love for as long as I realistically can, or take the step into the strange new world of adolescence along with my peers? He told his child, “It’s up to you. You can keep believing if you want. Don’t let anyone tell you otherwise.” And our son decided to keep believing just a little while longer.

And now he is in grade 7, on the cusp of being a teenager.

It has come up again, partly because some of his friends are aware that he was a staunch believer all the way through grade school. He’s been teased for believing in Santa into his double-digits. So, we burst the bubble. Dispelled the illusion. Lifted the curtain. And he was a little sad, a little nostalgic, but he understood. He has questions about how we made the magic happen, and with the blinders removed, a new understanding of the other the myths of his younger years: the Tooth Fairy and the Easter Bunny.

I’ve told him that if the kids at school bring it up again, he should change the subject or walk away. It’s not up to them to determine what he believes. It’s deeply personal. I related how I’d first figured it out when I was nine, but that I’d never told my parents that I knew until much later. And I told him, I’d kind of thought that was the situation with him — that on some level, for a few years, he’d already understood and decided to keep playing the game. And I admitted to him, in our conversation at bedtime, that many, many adults might not be at all surprised if they came into their living room on Christmas Eve and found a jolly fat man with a big white beard leaving presents. The magic is that palpable. I told him that even now, after thirteen years of parenting, at the age of thirty-six, I still feel a mild shock at midnight on December 25 when I realize that it’s ME, that I have to fill the stockings. I still want to believe, and a part of me does.

Do I wish that I’d gone the practical way and never raised him with the illusion? No. He has had year after year of anticipation, glee, love, surprise, and story. And even if he’d stopped believing at the same time as his friends, they’d find something else to tease him about — that’s what friends and children do, it’s part of human nature. There is a line that teasing crosses to become bullying, of course, but I don’t think we’re there yet. As individuals, we look for reasons to connect with each other, feeling stronger in the collective, and my son’s long-held Santa loyalty marks him as separate from the herd in some ways. Maybe it’s possible that some of them are jealous, on some level, that he was able to keep the dream alive. I know some will look down on him as being childish for it. There is always something that someone will use to belittle him with, in order to build themselves up. And we’re teaching him to see those acts for what they are, though it’s painful at times to go through. Even adults can have a hard time with this. I know.

Now, whether his sister has caught on, or is continuing the play, I’m not sure. Jack hasn’t been particularly careful about discussing the issue in front of her, but neither has she cared.

If you ever believed in Santa Claus, when did you figure out the secret? I’d love to know your stories, too! 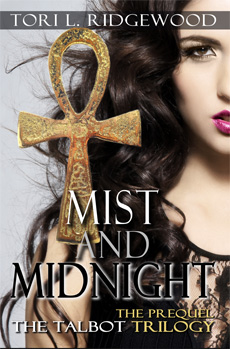 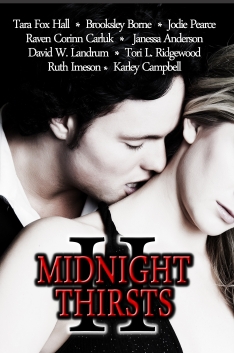 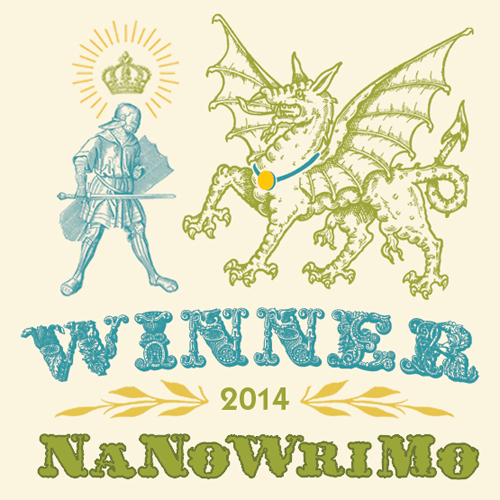 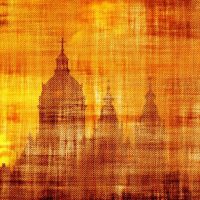