Relaxing for a bit, watching We’re the Millers on Netflix, enjoying a Diet Pepsi and Crown Royal because I’m out of wine (cracked open a small bottle hubby’s had for eight years, so he’s less than pleased, but oh well), and halfway the movie, the plot picks up a snag I did NOT see coming. A twist of irony. A complication that the protagonists are not going to see coming.

This is the essence of good writing, for me: evil, unpredictable plot points that sneak up on the reader (the term works for movies, too), sending the characters off in unexpected directions. This is what I try to do in my own writing, because otherwise, the story just gets so boring . . . I mean, you want to stick to some kind of formula or pattern that is familiar to readers in order to avoid isolating them completely, but when finding the path of the novel or play or what-have-you, those moments of discovery when an otherwise unthought-of option reveals itself and adds meat to the plot — those are golden.

When I’m teaching writer’s craft, I like to describe it as an unanticipated slap in the face, like what’s done to Barney Stinson (Neil Patrick Harris) in How I Met Your Mother. All the challenges that happen to your protagonist(s) are basically metaphorical slaps in the face, of varying degrees of severity. It’s how your characters respond and move on or grow from those events that helps to inform the story.

See? Plot points (major and minor conflicts, confrontations, challenges) are like slaps! The slap bet is the condition or set-up of the plot point, because it establishes the situation in which the challenge has to happen. The character knows something is lurking around a corner, and you feel the suspense of wondering when and where and how hard the “slap” is going to be. But there’s no avoiding it. In order for balance to be restored (in Barney Stinson’s case, his debt owed to Marshall over guessing wrongly about Robin’s past), the slap has to be gotten through, rather like a testing. There’s a connection here to the Hero’s Journey, I can sense it . . .

And then the slap itself is the most entertaining, particularly for those of us with a sick sense of humour. Doesn’t have to be an actual, physical, facial slap, of course — I’m just using the term as a stand-in for whatever it is that knocks the protagonist down and forces him or her to reconsider things, seek a different path, build his/her resilience, etc. Before a hero can win, he/she has to fall.

Hey — does that mean every writer who puts his/her imaginary friends though this is really a maniacal super-villain?

So plot evilly, writer friends! Don’t be afraid to sneak in those unexpected slaps, those moments of WTF and I-did-not-see-that-coming, because they will make your readers sit up and take notice. They will challenge your characters’ abilities and morals, their values and their journeys. And the more creative and dastardly your slaps are, the more I think your work will stand out in the crowd.

The last thing writers do before their work is released into the world is reviewing the proof copy for the publisher, making sure all the little details are right. Going over it with a fine-toothed comb. Comparing it with the list of items that needed to be fixed in the PDF. (I suspect proofing was easier in the time before e-copies, before transferring files from program to program caused glitches and don’t size changes and all those little annoyances.)

Proofreading: it’s both necessary, and it can be pretty tiring. I find it helps to read/review the book both as the author, knowing what to look for, and as a first-time reader. Yup — I pretend I haven’t read it before, as best I can, to approach the proof with fresh eyes. Helps if there aren’t any distractions around, too.

Plus — I am usually also fueled by nervous energy and excitement by this stage, so I have to exercise patience in the extreme.

SQUEEE! My book is here! The trilogy is complete! I’ve got the set! Yay! 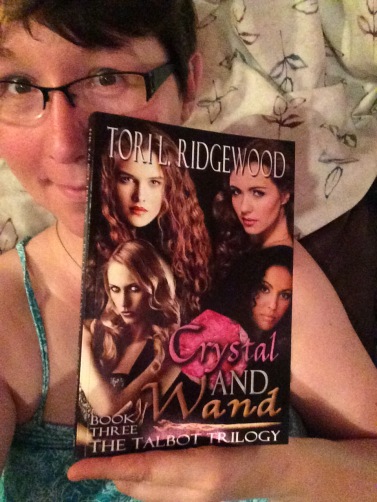 As I was saying, patience. It’s no good rushing out and shouting to the world that the book is ready if there are errors hiding sneakily in plain sight — I know, because I was overly enthused and didn’t look carefully enough for them in books one and two, and unfortunately, reviewers were the ones who caught them for me.

So, fellow writers (aspiring or repeat offenders), remember when you are proofing to do the following things:

And thank you to my editor and publisher at Melange Books for her unerring patience with me throughout this whole process. You are amazing, Nancy!